I’ve been asked this question a lot.  It’s a perfectly reasonable question when someone has a new book out.  Unfortunately, it’s not an easy question to answer.

Bottom line?  I have no idea.

Until you get a royalty statement, there’s just no effective way for an author to track book sales.  You can look at your Amazon sales rank, but that’s a relative measure against all other sales in the same time period, rather than a “number of units” kind of thing.  And it’s just Amazon… no other outlets are included in that.  Other online-only retailers use similar methods.  Everything else gets aggregated up, packaged, and sent off to the publishing house, but it’s multiple streams of data going into the publisher’s system, which, in turn, is opaque to any individual author until royalty time.

It’s frustrating when your background is in data analytics, because you know the data exists… you just have no way of getting to it.

The hard truth is that most authors can’t make a living at it.  Most don’t earn enough to quit their “day jobs,” whatever those might be.  We write because we like to write, and we’re all secretly hoping to get rave reviews and sell millions of copies.  But if we don’t?  Well, we’ll keep on writing anyway.  Which is what I need to get back to doing, now, so I’ll leave you with another productivity killer.  I call it, “Dog in Lap: Not a Lap Dog.” 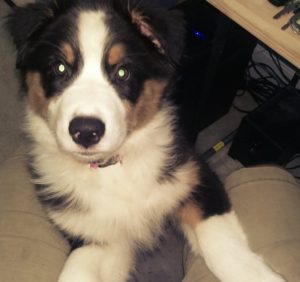